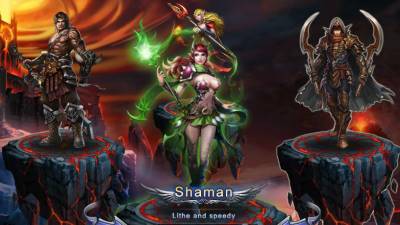 It seems that there are only four classes of characters and only one race (human) currently available. The classes are also gender-locked. 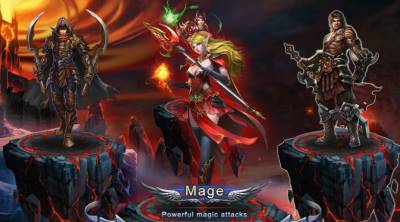 For this review I chose to play as a mage. I liked it but I would have liked it even more if there were more character types to choose from.

Since I was not impressed by the character creation screen, I was surprised when I started playing and noticed that the graphics are really quite good. Everything from the leaves on the trees to the NPC designs are beautifully detailed.

The only thing I had an issue with is the amount of scantily-clad NPC females the game has. The males are all dressed up with either full armor or body-covering clothes but females wear next to nothing. It’s kinda off-putting. 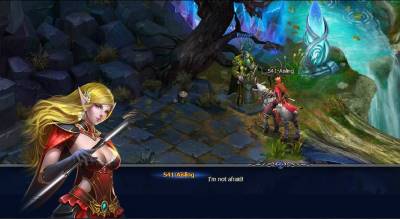 I like the story of Winterfrost Legacy. My character is a famed warrior, the heir to a kingdom who has renounced the throne. She returns home after a long period of wandering the world going on adventures. Her homecoming is unfortunately interrupted by an attacking army of ghouls.

SPOILERS! Of course, my mage character easily fights them off but sadly her father, the king, dies while defending the city and her brother Rhys is gravely injured. The next chapter of the adventure continues with my character bowing over the grave of her father. That was pretty intense and dark for a browser game but I loved it.

Also, I think it’s great that the story is not a simple good vs evil plot. You see, the ghouls are not just evil monsters who are rampaging about randomly. They have a good reason to attack the city.

It seems some time ago the kingdom sent to the northern wastes to find treasure. This turned out to be a very unwise move since they found no treasure. Instead, the members of the army caught a disease and became ghouls. The king’s diary noted that the they did not help the army’s survivors but left them to die in pain. No wonder they want revenge! 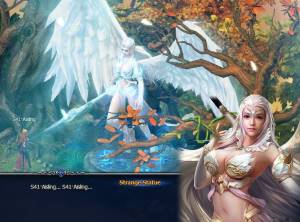 When NPCs talk in the main quests a pop-up appears on the bottom with text and a close-up portrait of the NPC. Quests are not voiced so you have to read to know what they are saying. It’s standard fare for browser MMORPGs.

The quests for beginners were excellent. Most browser MMORPG games just ask you to kill 10 rats or some such thing but Winterfrost Legacy does it right by giving players quests that reveal the story behind the characters’ motivations. There is plenty of fighting but there is always a goal behind it.

Quests are short and interesting so that is a big plus for players who enjoy a good story.

When a character moves around the map and encounters an enemy, combat is automatically joined. Fights happen in an instanced area. 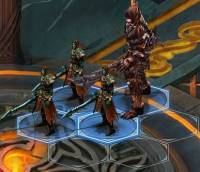 The character’s and enemies’ parties appear in a hex formation. The formation and position of each unit is very important in terms of strategy since most melee attacks hit the front row targets first. It’s therefore vital to have some high defence/hp units in front to protect the mages and squishy units.

Companion NPCs, called mercenaries, can be recruited and have their own skills that players can level up. At first combat is quite easy but as you level up you will encounter more difficult bosses. 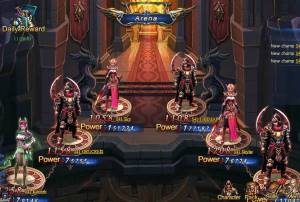 The PvP arena in Winterfrost Legacy is peopled by player characters that are controlled by the game AI. This is less exciting than fighting people live but the arena is challenging enough since there are always a lot of higher level players there.

I could not win most of the fights there so the PvP arena is probably much more fun for those who have better gear and higher level skills.

I was not able to join the other PvP events but there are a few exciting ones like the “Duel of Masks” where players join a faction then fight each other until the timer runs out or there is only one player left standing.

From a new player’s perspective Winterfrost Legacy is well worth a try. It has beautiful graphics and it’s free to play. However, it’s unfortunate that there are only a few classes. Despite that flaw, combat is still fun in Winterfrost Legacy because of the strategic importance of different formations, skills, mercenary companions, and gear. Tweaking your combat settings to defeat different bosses can be addictive, not to mention the PvP applications of finding an optimized combat strategy. The story and quests are also excellent. I recommend this game if you would like to play a new browser MMORPG.