Runescape is the grandaddy of browser-based MMORPGs. First released in 2001, this game is one of the oldest MMO games around and for a 14-year-old title, it still has a lot to offer. Although the graphics are pretty bad, the game itself is very interesting and fun. The fact that Runescape (RS) has been going strong for such a long time is a testament to its highly addictive quality.

Before I talk about gameplay, let’s discuss the worst thing about Runescape first – the graphics. Even during its original release, the graphics of the game were quite bad. Nowadays, although the graphics have improved, they are still far from being the best. Check out this cutscene screenshot: 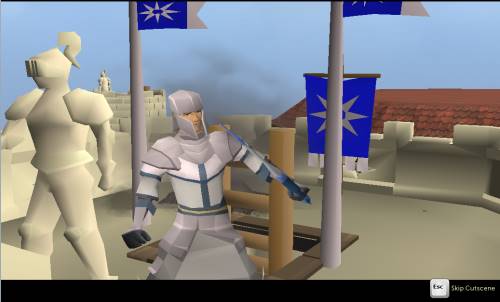 Not exactly awesome, is it? To be fair, this is low res. The HD quality graphics are somewhat better. Also, customization is excellent. No two characters look alike since there are tons of different hairstyles, costumes, and equipment.

If you can stomach the graphics, Runescape is well worth playing.

Skills are undoubtedly the strong point of the game. In fact, there are more life skills than there are combat skills. For example, there is fishing, woodcutting, firemaking, herblore, smithing, mining, crafting, cooking, runecrafting, farming, construction, etc.

The skills are trained all over the map (not in instanced areas) and they are fully integrated in the environment in a very interactive way.

To give an example, imagine that you are starting off in the game and you need food supplies. Your first stop is to thieve some seeds from farmers (thieving skills) and plant them (farming skill). While you wait for the plants to grow, you can go kill a few chickens (combat skills). The chickens drop feathers which you can use with your fishing rod to get salmon (fishing skill) from one of the rivers. Now you have some raw food that you need to cook. Just get your hatchet, cut some wood (woodcutting skill), light the wood (firemaking skill), then cook the fish and the plants you harvested over the fire (cooking skill).

If you love crafting, then you will love Runescape. Practically everything in the environment can be used as a source of raw materials and there are literally hundreds of items that players can make.

Since player crafting is kind of a big deal in Runescape, it means that players gather and craft tons of items everyday. These can be sold/bought either directly via player-to-player trading, or they can be sold at the Grand Exchange auction house.

The prices are set by the players themselves and the average price of items fluctuate depending on supply and demand. In fact, one of the many ways to earn money in RS is to play the market – players can try to buy items at lower than average prices and then sell them at a higher price later. Many a player has won and lost fortunes at the Grand Exchange.

This adds a welcome complexity to the game for those who enjoy making money without grinding.

The combat mechanics in Runescape are pretty standard for a browser-based MMORPG. Players can use skills which have unique effects and cooldown times. There are also plenty of different weapons and armor that have unique stats that are useful for attacking/defending.

The three basic combat styles are magic, melee and range (archery). Characters do not have classes and they are all human so every character can use all of the combat style. If a character wants to use melee, he or she equips a melee weapon and the same is true of magic and range.

It’s important to note here that Runescape is a very old game. Fourteen years of updates means that it has tons of unique equipment that players can use. The amount of combat items can be confusing for new players but most of them do have level requirements so each character only needs to change to stronger equipment every 10 levels.

Combat in RS isn’t particularly good but neither is it bad. PvE can be very grindy but PvP is still excellent since there are many different equips, combat skills, spells, prayers, summoned pets, and so forth that players can use.

Dungeoneering is a skill in RS and it is one of the best things about the game. The instanced dungeons are different each time the player enters one and they can be played either solo or in groups of up to five people.

When a player first starts in the dungeon, they are given basic low level items. The dungeons are not just combat-oriented, skills also play a big part of the gameplay. In the various rooms there are raw materials that can be gathered and the player can craft better items.

Dungeon rooms can also contain puzzles that range from the easy to the head-scratchingly hard. There are rooms with a sliding tile puzzle, follow the leader game (copying a set of emotes), fixing a light rhythm obelisk, mazes, lever puzzles, broken bridges that must be fixed, ghosts that have to be put to rest, riddles, and more.

Personally, I hate quests. I just don’t like doing them. However, if you do like quests then Runescape could be the game for you. All of the quests are well-written and have an actual story that isn’t “kill ten rats” or “bring me ten rat tails.” There’s also tons of quests (201) so if you like that sort of thing then RS can keep you busy.

Quests can be more than a little bit crazy. The Ernest the Chicken quest, for example, involves a guy named Ernest who was accidentally turned into a chicken by the pouletmorph machine. To save him, the players has to retrieve three items that were stolen by the poltergeists in Draynor Manor. The pressure gauge is in the fountain which is full of piranhas. The rubber tube is in a locked room guarded by an animated skeleton. Lastly, the oil can is in a maze of rooms with doors that can be opened by pulling the right combination of levers.

Ernest the Chicken is a novice level quest – most quests are much harder than that.

There are many other fun features of Runescape that I have not talked about yet such as the events, tasks, minigames, and so forth but this review should have given you a good idea of what the game is like. The only thing left to mention is that the map of Runescape is divided into two parts – the free to play map and the members map. Skills are also divided into free to play skills and members skills.

Membership is monthly and it costs slightly less than $10. A year’s worth of membership is currently $89.99. According to Jagex, the makers of Runescape, 90% of players are members.

Both members and free players can get free keys for Treasure Hunter (TH), pictured above. TH is a source of gold, cosmetic items, and bonus exp. Extra TH keys can be bought with real money but most people do not bother doing this.

Those who wish to play completely free can do so. I know of some people who have been playing Runescape for years without spending a cent on it. I myself have let my membership lapse sometimes so I know that the game is still fun as a free player.

Does Runescape still have anything to offer new players in 2015? Yes. Most people will be turned off at once by the badly outdated graphics but those who look beyond that shortcoming will find that RS tons of free content, including awesome quests, fun instanced dungeons, extensive life skills, interactive enviroments, and a player-controlled economy.