Guild Wars 2 (GW2) is one of the most popular and talked-about MMO games. Yet, here we are with another review of GW2. Is the gaming world crying out for another Guild Wars 2 review? Well, probably not! However, this website is about the best MMORPG 2015 so we have to include GW2 in it.

So, without further ado, here are my thoughts about this new and bestselling online game. 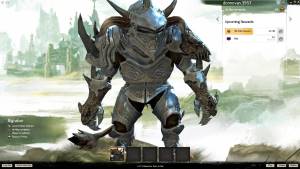 Where to buy: Guild Wars 2 on Amazon.com

The game takes place in the world of Tyria. Five elder dragons have awoken and now they are terrorizing the land, with us being the only ones able to stop their menace. But despite this epic premise, at first I found myself going from one place to another trying to solve numerous quests. So yes, the game doesn’t really manage to flesh out right from the start, but as time passes you will be able to gain levels, choose a faction and defeat legendary monsters.

Upon entering Guild Wars 2 I was a little fearful that it would keep the normal action that you usually find in an MMO. While the game does retain the same questing system found in the other MMOs, there are a few differences. You have a guidance arrow that specifically guides you towards the region where your next quest is located. Not only that, but quests are a lot more varied than you can usually find, because not only you need to gather items, kill enemies or use spells, but you also have more exciting quests such as helping a person find solutions for their issues. I also had to use a special weapon in order to capture enemies and battle them into the arena, so there’s always a new type of quest waiting for you.

When it comes to the characters, I found the 4 races in the game to be quite varied as each one is suitable for a variety of classes. And yes, Guild Wars 2 does have a ton of classes, each one very interesting and filled with a ton of unique challenges as you play. 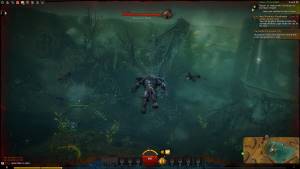 I like the fact that right from the start the game is varied and you get a ton of content to go through. The game world is massive, and because of that you will peruse plains, lava lands, hills and mountains multiple times, as you follow the game story.

But as far as my experience goes, I have to say that the professions as well as races are tied together by some game mechanics, which means that you are very dependent on the skills you acquire in the game. Not only that, but the best part here is that you can easily learn 2 professions at once, or drop any of them in order to learn a new one.

The skill box from the bottom of the screen is pretty much tied, as you get 5 abilities for your class, 1 related to healing, while the others can easily be modified according to your needs and expectations. I felt that the game is a little restrictive considering the fact that I would expect to be able to customize what skills to access at all times, but even so, the game does provide quite a lot of modification options.

As far as the level cap goes, I feel that being locked at level 80 is more than ok for all players, but even after you reach this there are numerous PVE and PVP events to go through, so there’s a lot of fun to be had. I felt that leveling was a little fast in the beginning, pretty much like in all MMOs, but this trend tends to continue as well until level 30, because after that leveling is much harder. Still, I found leveling to be natural and the game does allow you to feel a sense of evolution in this regard. 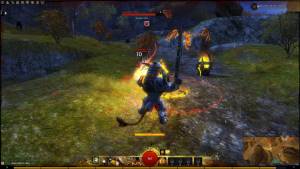 Combat in Guild Wars 2 is exciting, as it borrows some elements from TERA and other games, making the attacks for both you and the enemies in real time. Sure, it’s not as impressive as TERA is, but then again it was never its intention, instead the combat is fleshed out no matter the character you choose to play.

My favorite in Guild Wars 2 however is the world vs world mode that is very appealing, since you basically get to be a part of a large battle between multiple factions. I do have to note that the gameplay takes place in another place, not in the normal world of Guild Wars, but still it does a great job in this regard.

Crafting in this game is very fun for me, because you always get to play with a ton of interesting stuff, and there’s always something great to be added to the table. At the same time, Guild Wars 2 manages to integrate social mechanics quite nicely by avoiding to make them obtrusive, instead the chat box is located into a place that doesn’t disturb and you can close it nicely. It’s very easy to join a guild as well, and chatting with guild partners and friends is really fast and cool as well.

Guild Wars 2 looks really nice, despite not having the best visuals out there. Despite this, the animations are good, and the character design is spectacular, which is great considering how varied the game really is. The fantasy theme in this game is also quite exciting because the game world is nicely crafted and exploring is just a pleasure at all times, which is great.

The game manages to create a large and nice, exciting world which is just a pleasure to explore. The game mechanics and nice social integration complete the game quite nicely, and overall the title is just a breeze to look at. Considering the fact that you just have to purchase Guild Wars 2 and you can play it forever, this is a great investment if you are an MMO player. I play it very often and like the sheer diversity and large population that the game has. The fact that quests appear out of nowhere no matter where you are, the great combat and nice visuals, all add up to bring a wonderful gameplay and a good experience, one that you will like to repeat often. And with a new expansion on the way, Guild Wars 2 is all kinds of amazing!

Guild Wars 2 is, in my opinion, one of the best and most popular MMORPGs of 2015. It is “buy to play” which means that players must buy the game to play it. There is no monthly fee, however, so all you need to do is spend money on it once.