Dungeons and Dragons Online was originally released in February 2006 by Turbine, and though it’s now known as DDO Eberron Unlimited, it was initially called DDO Stormreach. Players are treated to a lush fronteir in the land known as Eberron. The game is free to play but premium territory, like that associated with the famed Forgotten Realms, can be unlocked in the cash shop.

Players begin with the basic races of Human, Elf, Halfling, and Dwarf, with a choice of basic classes in the categories of melee, spells/magic, and specialist. Within the melee classes players have a choice of fighter, barbarian, and paladin. Spells and magic casters can choose amongst socerers, wizards, and clerics. Those drawn to the specialist classes can select from options like ranger, rogue and bard. Premium packages, which can be obtained with favor earned in-game, unlock additional races, classes, adventure zones, and more character slots. 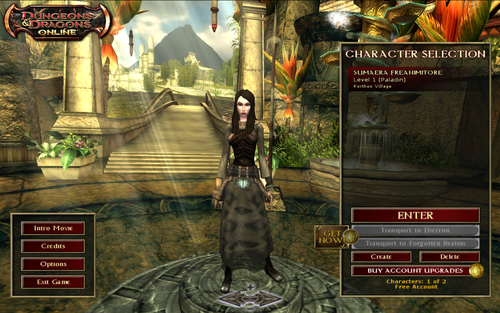 In typical MMO’s players grind experience levels and complete quests, this is only partially true in DDO. The difference with DDO is the ability to set the difficulity of the dungeons. Each dungeon has a difficulty level of solo, normal, hard, and elite. Epic difficulty is available to players who reach level 20. Each class plays a part in every dungeon encounter, so cooperation is key when not flying solo.

Certain challenges will require certain classes to overcome. The lockpicking and hidden passage detection skills of the rogue class will come in handy in every stage of the game. Quests come with bonuses for picking all of the locks, exploring the area completely, killing all the monsters, smashing everything that could possibly be broken, and finding all the secret doors. All of these bonuses stack up together to create a reward bonus for all the players within the party.

DDO is an absolutely beatiful world to explore, thanks to its upgrade to directx 10 and a high-resolution textured download pack. The 3D dungeons range from dark and dank crypts to firey caves, as well as wide, open vistas complete with majestic cliffs and sparkling waters. The character models appear well designed and polished. While playing on a desktop using the directx 10 upgrade, the frame rate often exceeded 230 FPS. Playing in the standard download package, using directx 9 on a laptop with an Intel processor the game played seamlessly and looked gorgeous.

A variety of different narrators and voice actors appear throughout the game, some being as noteworthy as the original D&D founders. A few of the early narrators and quest mobs are less stellar, however, sometimes coming across as forced, or worthy of a groan or a giggle. Overall the storyline, plot progression, and lore that Dungeons and Dragons fans have come to expect is translated very well in DDO. Each new encounter is engaging and dynamic for a fully emmersive experience for social gamers to truly enjoy.

In addition to frequent updates and regular releases of fresh content, the combination of a dedicated development team and passionate players makes DDO feel both expansive and welcoming. The playerbase is dynamic and supportive, trolls are practically non-existant.

Because each class is needed for maximum success in a dungeoun it’s easy to find a party for group questing and experience runs. Players tend to be very helpful, showing novice players through unfamiliar dungeons and offering a hand when needed. It’s not necessary to always play with a group, there’s always the option of playing solo and paying for hirelings with gold or turbine points. Don’t expect a high level AI with the hirelings and your band of merry adventurers will get along just fine.