In the comments of my other posts about 2015’s best MMORPGs and even in social media, people have been asking me the same old question: “What about ArcheAge?”

Well, here’s my honest opinion: “Hackshield? No thanks.”

So, no I have not played it and probably never will. Having said that, I do know that it is a very popular game so I reached out to my online friend ViperX for a review. For those who were asking about it, here is a guest review of ArcheAge. 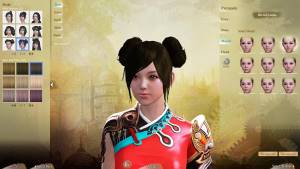 One of the things I enjoy in an MMO is the ability to create my own experience and enjoy a massive game world that is always at my disposal. Unfortunately, I found most MMOs released recently to be quite restrictive, with few of them actually bringing ease of use and a fleshed-out gameplay in front. ArcheAge is one of those games, and what makes it great for me is the fact that it takes an interesting game world, puts some Everquest aroma into it and mixes it with ideas from other popular MMOs, then calls it a day.

Thankfully, ArcheAge is much more than just a mix of genres, instead it’s a fun MMO experience in which every action is right under your fingertips at all times. All the actions that you perform within the game tend to require an interaction with other players in the game world, in either active or passive form. The interesting thing here is that you can create your own home, decorate it and scour the land in order to find and kill enemies.

Pretty much like any other MMO, ArcheAge comes with a solid and very diverse gameplay. You can choose to opt for trading, crafting, crime or wars, pretty much like in real life. The game also makes a good job with the concept of professions, which are implemented in a very unique and interesting manner into the title.

The game also comes with a base creation process that I found to be very immersive, as the whole process does require a lot of attention and strategizing in order to get the job done properly. There are also a variety of professions that you can choose from, but before you do that you need to create a home. ArcheAge does resemble real life to some extent, and that’s what made it very realistic for me. Once you create the base, you need to expand your own territory through fighting, be it other players or the AI enemies you can encounter.

One of the things I enjoyed in ArcheAge was the deep character creation, although this focuses mainly on the face and less on the lower portions of the body, such as the body size for example. Still, with the character creator added here you are pretty much free to modify the character appearance in any way you want.

I think that having only 4 races is a little unfair for an MMO, as I would have liked more variety rather than that. The characters you create can be a part of two different factions, the east and the west. I personally enjoyed the Firran from the west, mainly because they have a funny and cute look to them.

I liked how ArcheAge handles the class system. Instead of adding a multitude of classes, you are free to create your own by selecting 3 out of 10 skill sets. All of these are varied, so there are a multitude of combinations that you can choose at all times. The great thing here is that the skill sets retain their own levels, which does make you play more and more, a very cool thing to be honest. 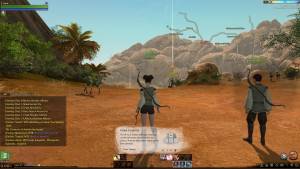 Unfortunately, quests in ArcheAge are a little bland, and in my opinion, they just fail to do justice to the game. You just have the old kill X stuff and report to Y or gather something and report to Y and so on. In addition, there’s also tab targeting that you can feel most of the time, something that just leaves a lot to be desired in this particular situation.

However, they do manage to implement an interesting idea for quests in the form of commitment. Basically, you can complete a quest early with no bonuses or you can wait until you are more than capable for it then over-achieve in order to get the most loot and even some bonuses as well. It all depends on how much time you dedicate to the game, so only those that spend a lot of time playing ArcheAge will be able to take full advantage of that particular gameplay feature. The main story in ArcheAge is actually quite good, but it doesn’t shine since it’s filled with a lot of cliché moments.

But what does it make ArcheAge a wonderful game? This is definitely the community in my opinion. Being able to talk and trade with the AI is fun and all, but the overall economy as well as most of the gameplay on its own is controlled by the players themselves. You rarely find potions or items from virtual traders, instead these potions are created by people with such a skill. Yes, this is what makes ArcheAge so unique, the fact that all players do have a role in this game, and they manage to add u in order to form a society.

Within this game you can find your own vocation and improve it or even excel at it if you want. What I found a little scary though is the fact that ArcheAge doesn’t really come with any rules, you can gain resources in any way you want, with stealing and even scamming other players being allowed.

I used public farms while playing, as these are free, but if you want to get your own plot of land and get access to protected farms, then you need to become a subscriber. Unfortunately, the differences between a subscriber and a free player tend to be notable, but thankfully this doesn’t really take from the whole experience that this game brings us.
Players are limited based on the amount of Labor they have, and this is the way that ArcheAge uses in order to limit gamers from gaining too much too fast. 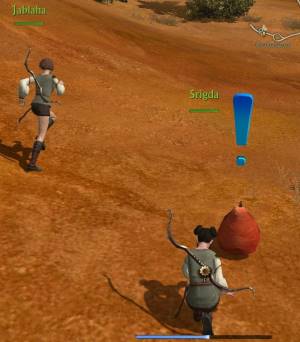 In the beginning, I found ArcheAge to be a little unforgiving. The AI is very dominant and most of the time tries to attack in packs, so the combat can get intense and pretty challenging at times. The animations during combat are fluid and even though the battles on their own are far from being as realistic and in real time as in TERA for example, the game still does a good job in my opinion. Sure, there are situations in which battles are clunky, but overall the main emphasis of the game is on the human interaction and the society as well as the economy that ArcheAge creates
.
I liked the fact that if your character steals items in ArcheAge, he will be marked as wanted, and then he will have to face trial. This unique and highly amusing system is very interesting, unless you are sentenced to jail. And here comes the funny part, jail time in ArcheAge takes place in real time, which means that you actually need to stay behind the bars. Sure, you can break out, but there will be limitations. Jail time differs based on the crime you commit, but it can be from a few minutes to days.

Since this is a game mostly about pirates, exploring the seas is a stunning experience, and not only it looks stunning, but it’s also filled with dangers. You can even find ancient monsters on the sea or, if you are the adventurous type, you can try to dive in order to explore the shipwrecks.

ArcheAge is centered towards PVP, but it also manages to bring some good PVE as well. The chat system is really good so players can interact with others without a problem, and they can even create guilds, engage in raids and perform a variety of other tasks. You just aren’t restricted to anything when you play ArcheAge, and that’s what I enjoy the most about this game, the unique human interaction and the utter freedom that the game is offering to us. From exploring the large game world to raiding dungeon with friends, there’s always something new and exciting to be found in ArcheAge.

ArcheAge looks really good, but its main forte according to my experience is the sea. Its sea looks amazing and with a very high quality, which is great, because many of us will explore the sea for quite some time. The character design is good, sometimes gruesome, but it does fit with the theme of the game. Animations are great, and overall the title does manage to provide a massive visual appeal that I personally enjoy a lot.

The soundtrack here is a little lackluster, but that’s ok since you can use your media player at any time. Voice acting, what little you can find, it’s decent but not that impressive to be honest.

While it might not be the most impressive MMO out there, ArcheAge manages to provide a ton of value and it just removes the whole idea of restrictions. You can play as who you want, how you want and when you want. Not only that, but each action comes with repercussions, pretty much like in real-life.

I found ArcheAge to be enormous and filled with a lot of interesting stuff. However, the best part about it is that us, the community, we are able to shape the future and present of this game. It’s the first true sandbox MMO on the market, and it’s one of the most impressive experiences you can check out right now. Rest assured, ArcheAge is more than a simple MMO, it’s a great social experience that everyone will enjoy and appreciate.

That’s the review. Thanks to ViperX for it. Let me know what you think in the comments below.